From Hobart, Tasmania we start with the ultimate sailing voyage, a 48-day South Pacific crossing to Stanley, the Falkland Islands. At 50 degrees south on the Pacific Ocean to 50 degrees south on the Atlantic Ocean we will try to make an official Cape Horn rounding. During this voyage, nothing is sure, and so it is the ultimate adventure. Weather and wind will shape our route and the result will hopefully be to round Cape Horn. To successfully complete this attempt, only the sails may be used and even more than on other voyages we will need all hard-working men and women on board! Keep in mind that this difficult voyage asks a lot of everyone on board and it will most probably put your stamina to the test. 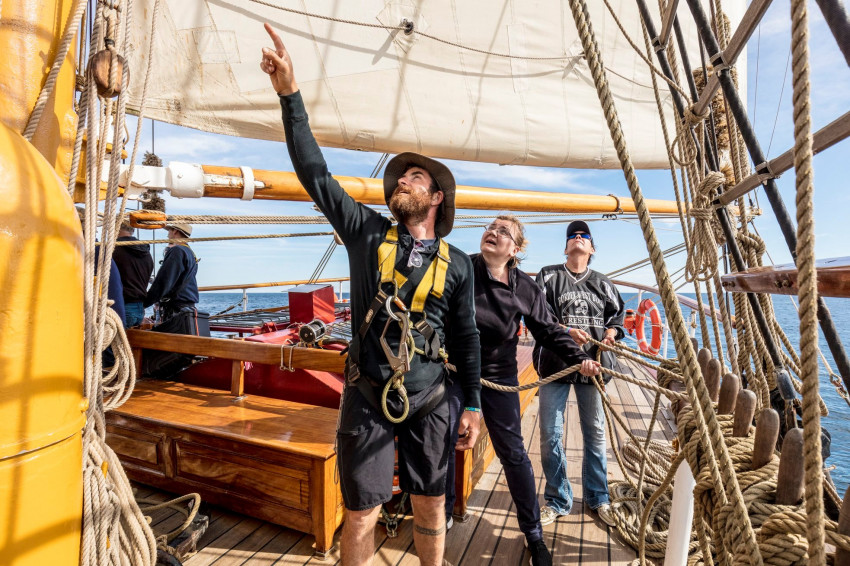 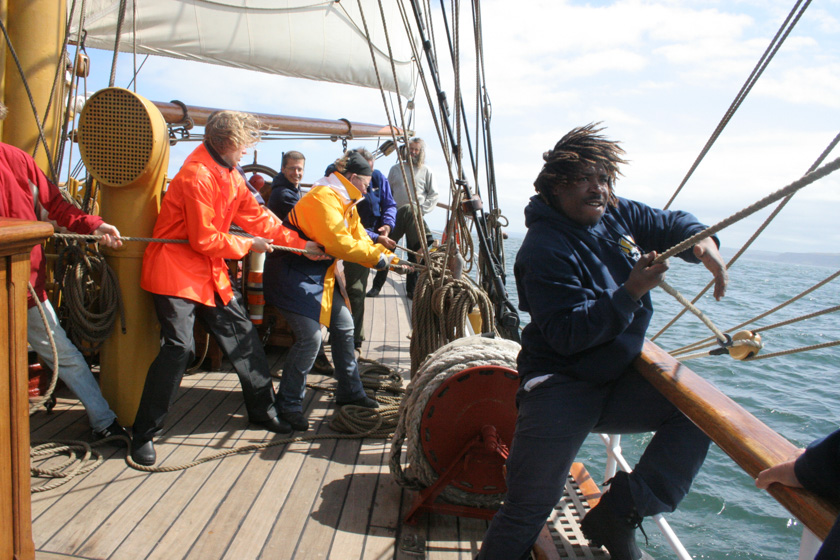 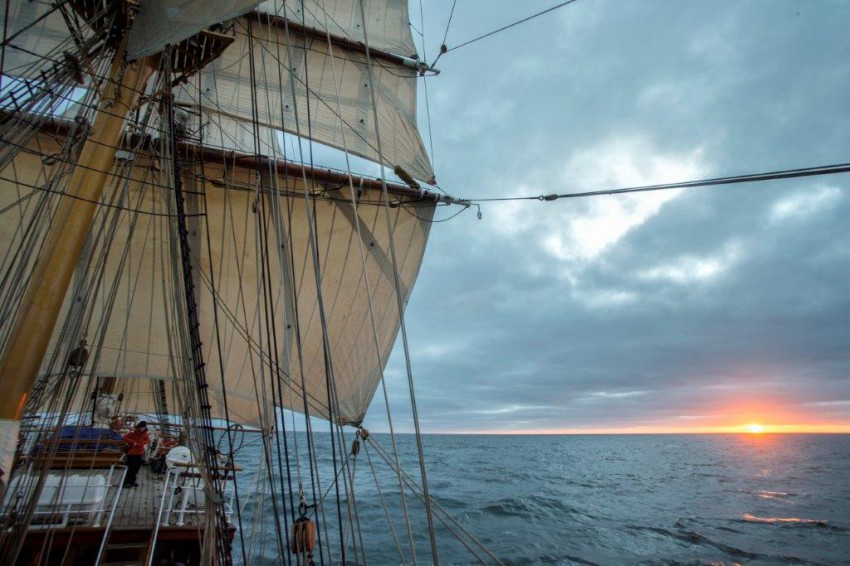 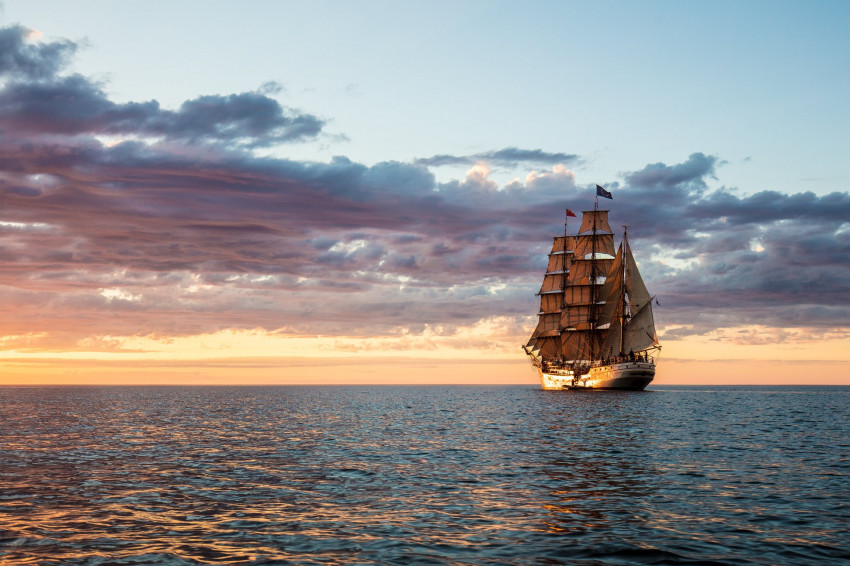 This voyage will start in Hobart, Tasmania. More than 70 percent of this states land is covered in forest, more than half of it is protected by the government and more than 1/5 of the land is listed as Wilderness World heritage area. Tasmania is well known to be Australia’s natural state. The vast wilderness of this state will impress and amaze you. Her wildlife can be observed everywhere, and the state has the cleanest air observed in the world. This unpolluted air allows the most wonderful species of flora and fauna to thrive. The rainforest trees are ancient and incredibly tall, they are usually covered in many different forms of moss. The massive ferns are everywhere. The animals live undisturbed and you might find yourself in wonder of just how beautiful nature is when left untouched by humans.

Hobart is Tasmania’s capital, more than 40 percent of the Tasmanian population lives in this city and it has lots to offer. When arriving in Hobart you can see the promise of this nature state as the impressive peak of Mount Wellington is ever present on the horizon. Bark EUROPA will be berthed at the city’s large waterfront. This city is shaped around the water and the marina is home to some beautiful wooden boats. The city has many bars, cafés and restaurants. All the shops with necessities and many arts, crafts and bookstores can be found in Hobart’s city center. There are a few museums well worth a visit, first of all ‘MONA’ Tasmania’s museum of old and new art. A Mona ferry can take you from the city to the museum and the ride itself is already a spectacle. When in Hobart, make sure to visit the Royal Tasmanian Botanical gardens just a few minutes’ walk from the center, they are wonderful and many special plant species can be found. The city and especially the land beyond are worth exploring so make sure to pack your hiking boots for this adventure. It is well worth visiting before you embark for your ocean crossing!

After embarkation in Hobart we will head to the ocean. An ocean crossing on a ship like Bark EUROPA will not only give you an idea of several aspects of a sailor’s life in the Golden age of tall ships – it will invite you to experience what it is like for yourself. Despite the modern equipment for safety, navigation and communication, the simplicity of the life on board is similar to what it would have been like more than 200 years ago. It will give your mind an opportunity to rest. It does however not mean you will be restless on board. On the contrary, in between standing watches at the helm or lookout and handling the sails, there is always plenty to learn and maintenance jobs to be done. It offers you the chance to really delve into the theory and practice of tall ship sailing and al that it entails – sail handling, rigging, maintenance, navigation and much more.

Without the access to internet or mobile connection, without the rushing which characterizes the everyday lives of many people, what’s left is the endless blue around us, our destination and the present moment with our fellow sailors. No more, no less. The rhythm of life on an ocean crossing, as determined by the mood of Neptune, will ease our minds and strengthen our legs. Wind and weather will make us furl, unfurl, brace, trim, set sail, take away sail and climb mountains (for a Dutchman) walking from Port to Starboard as on this crossing conditions can be rough.

This simplicity of life, the close proximity to nature and the ultimate freedom. The never-ending mountains of water appearing around and disappearing underneath us, the feeling of being so vulnerable to the magnificence of nature, the indescribable beauty of sunrise and sunset at the ocean, the millions of stars, the wildlife and all shades of blue make a truly once in a lifetime experience. And at night in the darkest blue, while the stars stare, the moon mumbles and the sun looks at things from another side, we will keep on working and the wind will keep on pushing us forward over the Pacific, towards Cape Horn.

Cape Horn, the famous island with a light house on top, is situated at the very bottom of South America. For many sailors, this is one of the three great capes in the world (Cape of Good Hope & Cape Leeuwin). Cape Horn was discovered and first rounded in 1616 by the Dutchman Willem Schouten, who named it Kaap Hoorn, after the city Hoorn in the Netherlands. Cape Horn has an infamous reputation, being at the northern part of the Drake Passage, named after the British sailor Sir Francis Drake, which is the narrowest stretch of water in the whole Southern Ocean, stretching between Antarctica and South America. The weather in this narrow stretch of water is rough and can be very challenging. The prevailing winds and currents that circles the Southern Ocean rush through here. Landmasses usually interrupt the course of the prevailing winds, but with no landmasses in sight, the whole way around the globe the weather has had unlimited space. When they arrive at Cape Horn, they are forced through this narrow stretch and landmasses obstruct their way. For this reason, many sailors know these waters from hundreds of brave stories and to experience them on board a traditional square rigger will be something not many have experienced anymore. Be ready to practice all you have learned in the last month, be ready to truly test your sea legs, be ready to act on moments’ notice and brave the weather around Cape Horn.

During the attempt of rounding Cape Horn, everybody on board will participate in the watch system and by doing so learn how to sail a square rigger around Cape Horn. But for those of you who want to walk the extra mile, this is the possibility of becoming an official Cape Horn sailor.

Back in the days when sailing ships sailed the old trade routes, Cape Horn was an infamous part of every sailor’s life. Many sailors reached rock-bottom in the harsh weather conditions of strong winds, large waves and strong currents. At the same time, sailing Cape Horn was considered quite an achievement. In 1933 a group of French captains established the Amicale des Captaines au Long Cours Cap Horniers (AICH). Their aim was to promote and strengthen ties of comradeship between men and women who embodied the distinction of having sailed around Cape Horn in a commercial sailing vessel. The Dutch section of AICH welcome new Cape Horn sailors and honors them with a token. To be eligible for this token, you must show perseverance and actively participate in the watch system for a longer period of time on a sailing ship rounding Cape Horn by sail alone from 50 degrees south on the Pacific to 50 degrees south on the Atlantic Ocean. Be aware, that only the captain can decide whether you have worked hard enough during the Cape Horn rounding to be worthy of such a special token.

Arrival on the Falkland Islands

When the winds are in our favour, EUROPA may arrive in the Falkland Islands a few days early. This will give us some extra time to explore the area and make some visits. The Falkland Islands, with its striking scenery, fascinating wildlife and billowing hills, are well worth a visit. You can find Gentoo, Magellanic and rockhopper penguins, black browed albatrosses and of course large sea lion and elephant seal colonies. In total there are more than 700 islands belonging to the Falklands/Islas Malvinas, each with their own unique features and animal populations. 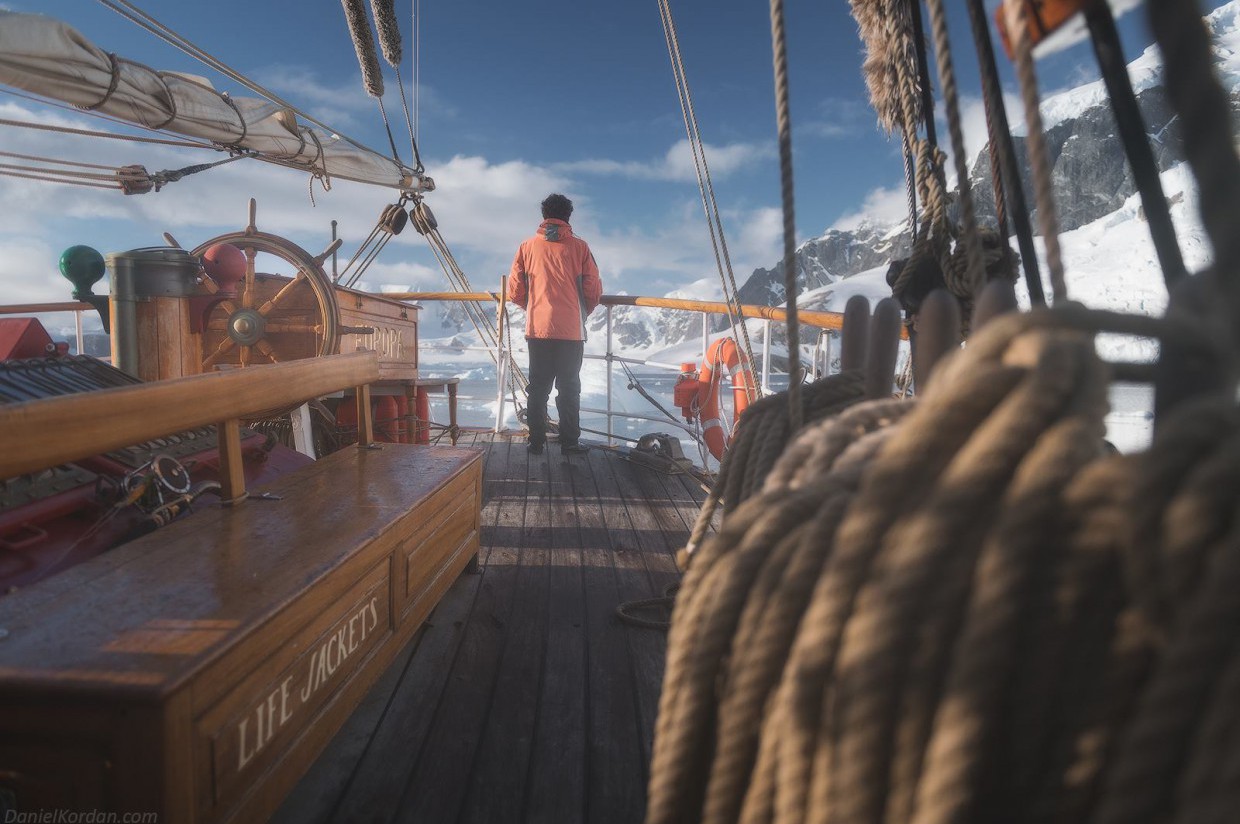 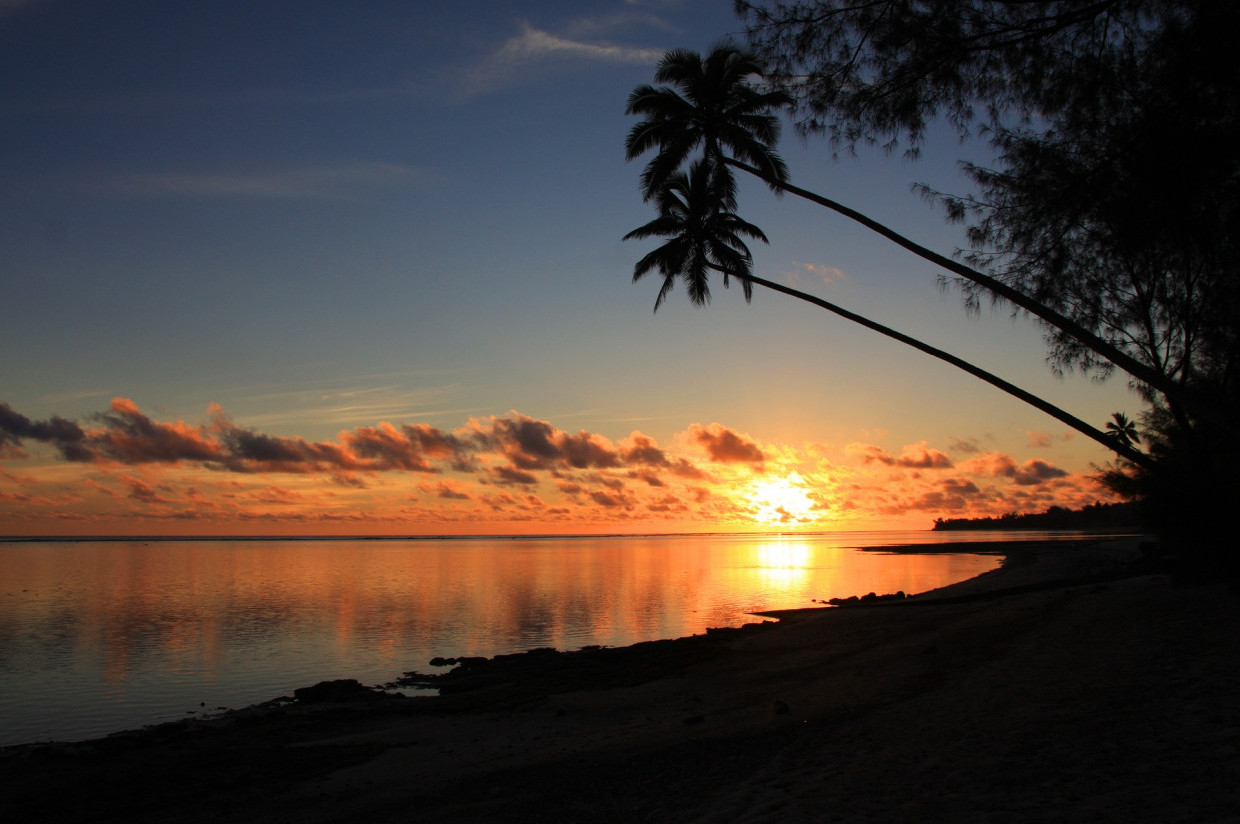 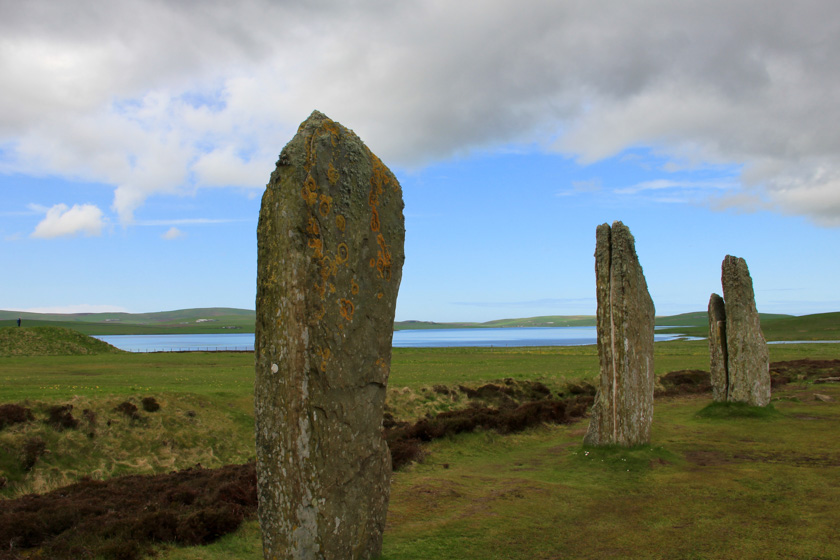