In search of Vikings

On this trip Tecla does not only trace her own footsteps back to the British Isle. It will be a journey through time following the ancient navigators. A cultural and natural voyage, a great combination of historical sites and rare wild live. Standing stones and spitting geysers, golden eagles, otters and arctic foxes, their all part of the places we visit. Witness this transformation, leaving the Mid Atlantic Ridge with its volcanic wilderness arriving at the gentle basaltic slopes. A chance to enjoy the cultures and cuisines of these isolated island communities. 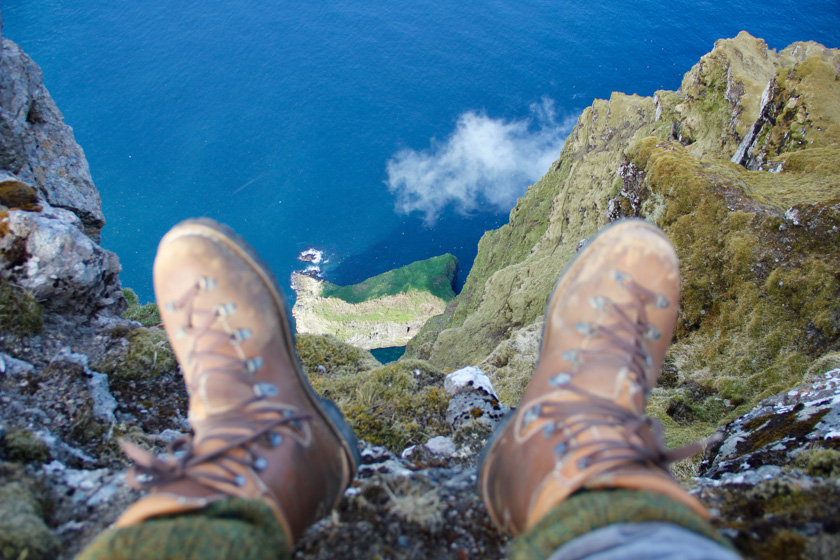 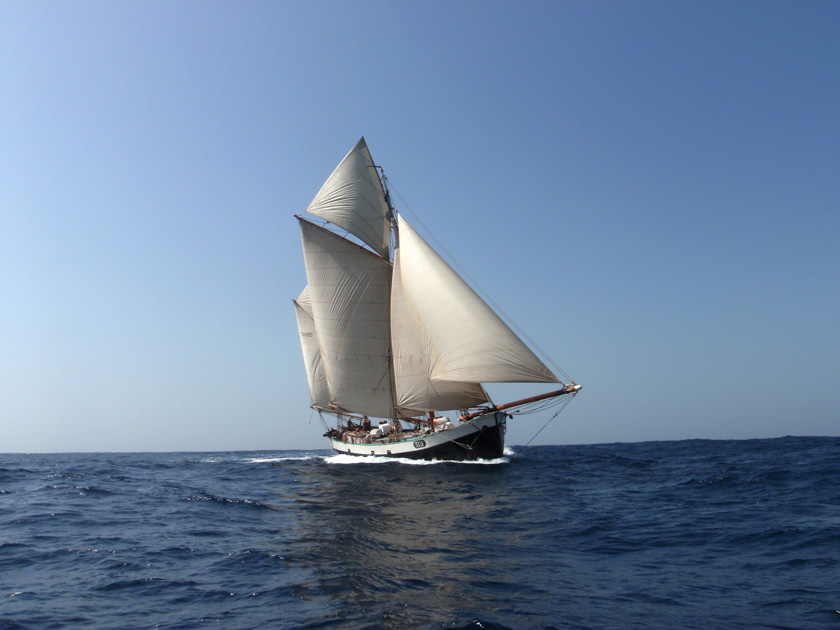 Leaving Reykjavik, we first have to clear out at customs and immigration. Leaving Reykjavik, we won’t leave Iceland just yet. There is one stop we have to do. The Westman Islands. Apart from its large Puffin colony, the Islands have much to over in ways of geology. This group of Islands is only 12000 years old! In 1973 a volcanic fissure opened up the main Island and a new volcano, Eldfell gushed out lava streams. As a result, the Island became two square miles bigger.

Leaving Heimaey we set sail for another group of Islands, The Faroe Islands. We will feel the real Atlantic as we split up in watches and sail for the Faroe’s .The Faroe Islands are way out there in the North Atlantic current. This group of 18 islands is fully exposed to the fury of the Ocean. It is wind swept being right in the path of the depressions moving North East. This makes it isolated and there for untouched. It is raw and rough, home to some of the world’s most awesome views. The first sight of land after a 400nml sail over the North Atlantic open water!

If the weather is fair the cliffs off Slaettaratindur will be visible from a great distance. These are Europe’s highest sea cliffs at 882 meters above sea level. First port of call will be Torshavn, the capital of the Faroe’s. After clearing customs and immigration we will explore the Islands and magnificent fjords. The Faroe Islands where chosen number one destination 2015 by the readers of National Geographic Traveler. Criteria’s being, sustainable, culturally minded, authentic, superlative, and timely.

The Islands have much to offer. Places like the Viking excavation site at Kvivik. Gannets bomb diving at their largest colony at Vestmanna Take the steps down to Gjogv natural harbor and be overwhelmed by the nature surrounding you! Make the hike to Ambadalur valley and gaze at the marvelous site of Bugvin, the tallest freestanding cliff column in the Faroe’s! And there is more! Mykines to the west with its bird colonies of Puffins, Gannets, Fulmars, and Black Guillemots. Take the walk up to the light house over the challenging free hanging bridge towering 35 meters above the Atlantic Ocean.

Leaving this north Atlantic archipelago another stretch of open water lies ahead of us. The 190nml would normally take no more than 36 hours, a good time to contemplate thoughts.

Keeping the ship on a south easterly heading, Lerwick is our next stop, this famous old herring port used to be filled with herring drifters of all sorts. The Dutch also used this port to land their catch and take in new provisions. After clearing customs and immigration, Lerwick is a good base from where to start exploring the mainland. Sites like Jarlshof-Prehistoric and Norse settlement are a must when visiting the Shetlands. Unst with Hermaness National Nature Reserve has a great variety of wild live, birds as well as mammals. If we are lucky well even get to spot an otter! Making our way south Fair Isle is our last stop in the Shetlands. Lying halfway between the Orkneys and Shetland, it is one of Britain’s most successful remote communities and known for the warmth of its welcome to visitors.

Depending on the wind and weather Westray or Sanday will be our first stop on the Orkney’s. Both Islands offer great cultural history as well as unspoiled beaches with a large range of wild live. Sailing among these Islands we will stumble across sea mammals include common and grey seals, otters, orcas, dolphins and porpoises and the occasional lost sperm whale. Navigating between the rocks and stacks, Stromness is our next port of call. From Stromness we will set out on an excursion around the main Island, visiting sites like Skara Brae, Ring of Brodgar and Maeshowe. That evening we will make the short hop to Hoy. Orkney’s second largest Island rises dramatically from the sea with Ward Hill towering 480 meters above sea level. Leaving the “Old men of Hoy” on the horizon we will soon spot the Butt of Lewis. Leaving Cape Wrath well to port with Stornoway our new destination. From here we will have the next day to explore the sites of Gearannan black house village and the Callanisch standing stones. When we set sail for Ullapool, we end an epic journey. Passing the Summer Isles in the footsteps of ancient explores!

Tecla is back in Ullapool for the last sun rays of summer. We have planned two trips leaving from Ullapool at the end of this season. From this lovely and friendly fishing port we will set out into the vast wilderness of northern Scotland.

Birdlife will include, Skuas, Puffins, Razorbills, Guillemots, Auk, Gannets and lots more. You will be able to spot whales coming out of Reyavik – some Minke Whales or Humpback whales are easy to spot. Even a Killer whale can be spotted along the coast of Iceland and around the Scottish Islands. 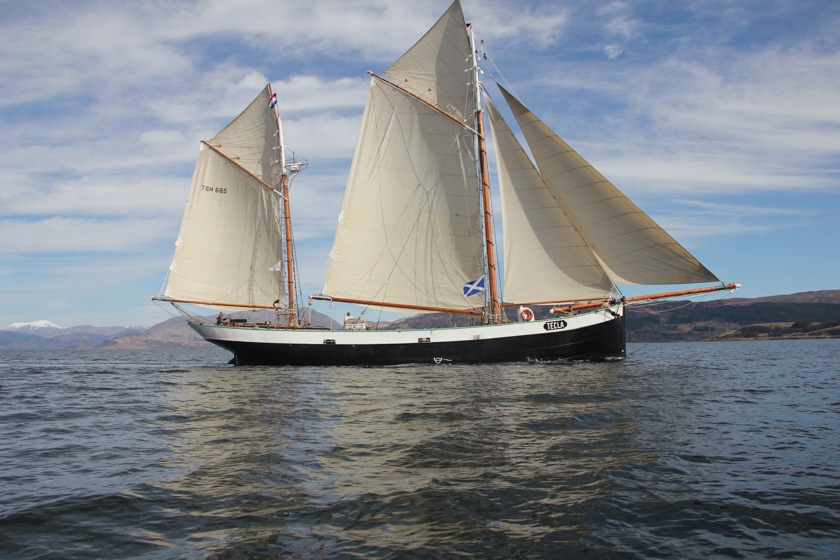 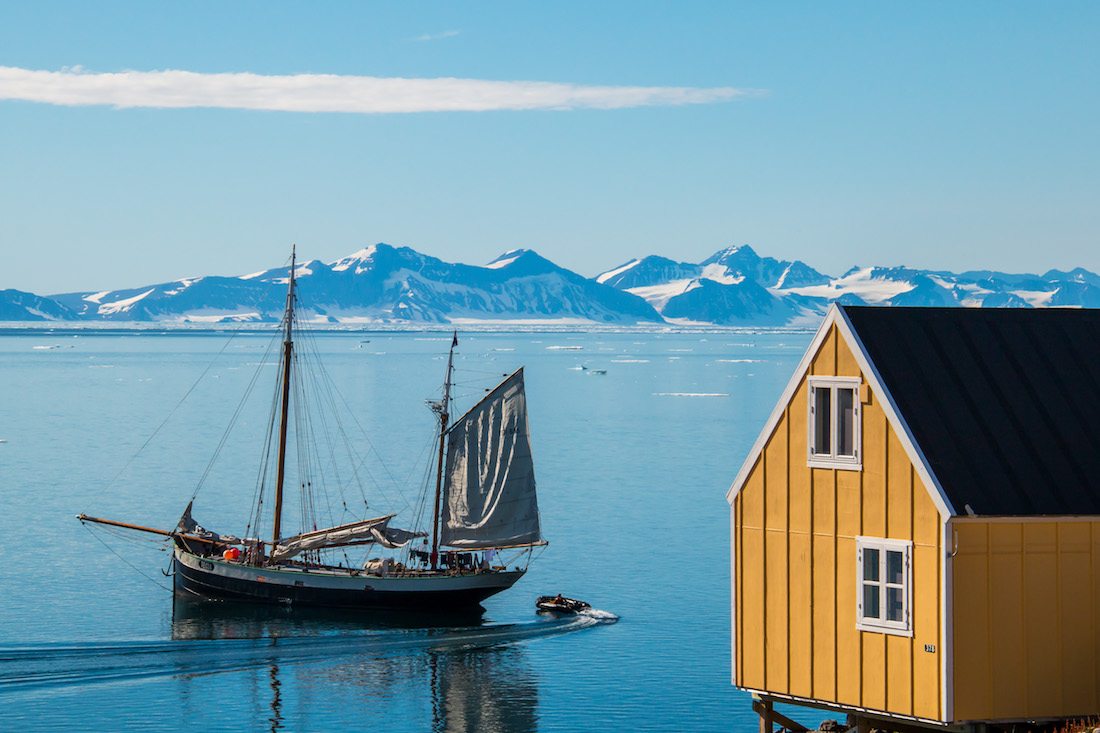