our research on board

More and more plastic is polluting our oceans. Where does it all come from? From fishnets, toothbrushes, bottles and many of the other consumer goods we use. During the past 10 years, more plastic was produced than during the entire 20th century. And it is estimated that if we continue in this way, there will be more plastic than fish in the oceans by 2050.

Plastic degrades to small pieces of plastic, which are toxic for the animals that mistake these small colorful pieces for food. Did you know that it takes up to 500 years before most plastics have dissolved completely?

We want to contribute to research. That’s why we do facilitate researchers on some of our voyages, so they can take monsters or observe phenomena on board.

But what can be done about the ‘plastic soup’? Our contribution is to facilitate research on board. One example is the research conducted during our ocean-crossing from Cape Town to the Azores. We hosted researchers and their ‘Samantha’. This inventive tool was deployed on the side of the ship and used to catch plastic floating on the surface. Every day, ‘Samantha’ was put in the water for one hour, and afterwards the catch was collected. Now, the researchers have disembarked and they will analyze the results in the laboratory.

One of the findings we can already share as this was so obvious. And that was the difference in the amount of plastic found in the different Gyres. Gyres are rotating ocean currents, sometimes gyres are compared to a kitchen sink, since they suck all floating items to the middle of the gyre. Therefore, much plastic collects in the middle of the gyres. Research on board showed that there was more plastic in the North Atlantic gyre than in the South Atlantic gyre, which can be explained by the enormous usage of plastic in the USA and Europe for the past decades.

The project aims to prevent further pollution of the oceans by understanding why such pollution occurs and providing recommendations to motivated industries and consumers to address the issue. 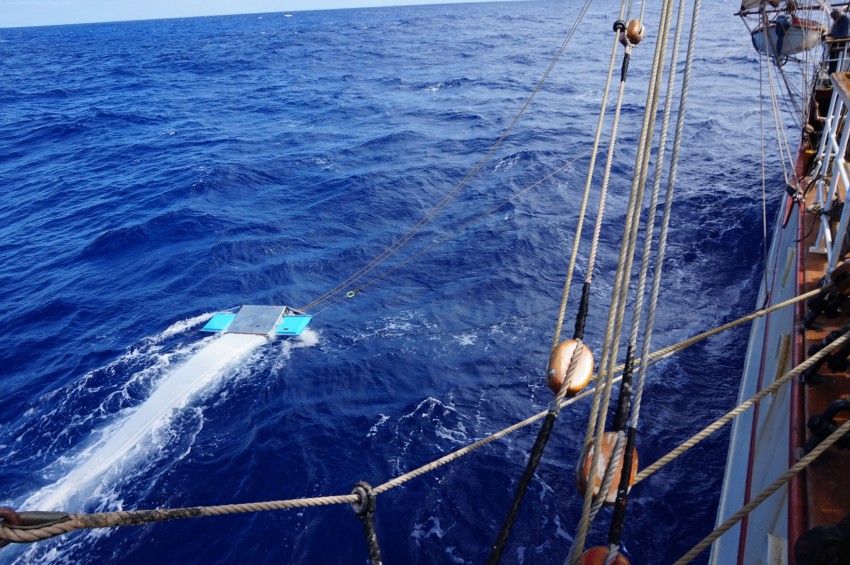