The Sagas of Icelanders are fascinating stories. Often the stories tell historical events that took place in Iceland in in the 9th, 10th and11th century.

One of the sagas is about Grettir. His character is ill-tempered, strong as a Viking and sometimes a proper hero defeating numerous enemies. The saga is believed to be set in Drangey, an island we visit during our voyage from Akureryi to Isafjordur. Grettier got cursed by ‘draugr’ Glámr (a zombie-like figure) when Grettir defeated this creature. This curse is believed to be the cause of his misfortunes.Grettir got blamed for setting a farm on fire, killing many people. He becomes an outlaw, meaning that anyone can kill him without legal penalty. Many infamous attempts are on his life followed. Grettir becomes the longest-surviving outlaw in Icelandic history. After twenty years his outlawry was lifted because of pleas of friends and family. His enemies did not agree with this decision and used sorcery to finally defeat him, on the island of Drangey. 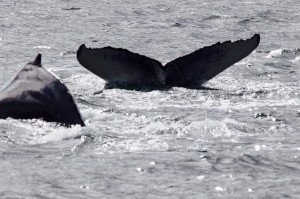